Fiikus Klubi was a series of club nights at Mad House Bar 2017. The idea was to have a guest dj who plays records and tells autobiographical stories based on music she/he plays. Dj’s were Juha Valkeapää (16.2.) , Pilvi Porkola (9.3.) and Anna Cadia (16.3.). 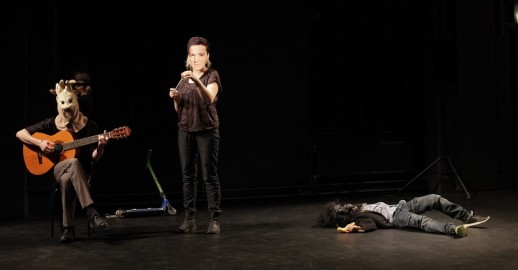 Performance Art Society was a collaboration between me and my son Anton (10 years), my colleague performance artist Tuomas Laitinen and his son Ilari (11 years). It started from the interest into performance art shared by the adults and the kids. The adults were interested in performance as a pedagogical tool, the kids wanted to have fun while making wild performances.

We had two starting points for our working: historical and material. For the historical, we studied together the history of performance art used that for inspiration for our practice.

We had one public performance “Are you ready, Bruce?” that was performed public twice in Helsinki: 27.4. at Esitystaiteen markkinat and 17.5. at Eskus Demonights.

A participatory work done in CARPA at Theatre Academy. The idea was to think the idea of knowledge and how we build it together during the conference. In the end of conference, participants were invited to create a temporary monument of knowledge.

This is a series of performance acts and photos done in collaboration with my family at Christmas time. Each Christmas we have a score to act and the completed performances are documented. The background of these acts is to rethink and recreate traditions we have as well as have fun together.